Group of Laborers Standing, Posed, in Front of a Chain-Link Fence, with Sacks Piled behind Fence

1905
This photograph shows local workers at a railroad siding for the Murgab estate near the town of Bayramaly (present-day Turkmenistan). The Murgab Oasis and the city of Merv (now Mary) were annexed by the Russian Empire in 1884. The oasis takes its name from the Murgab River, which flows from Afghanistan into Turkmenistan and forms part of the border between the two countries. Behind the wire fence are sacks of cotton press cake at center and bales of cotton on the right. Beyond the rail freight car are remnants of an ancient fortification wall built of adobe brick. The image is by Russian photographer Sergei Mikhailovich Prokudin-Gorskii (1863–1944), who used a special color photography process to create a visual record of the Russian Empire in the early 20th century. Some of Prokudin-Gorskii’s photographs date from about 1905, but the bulk of his work is from between 1909 and 1915, when, with the support of Tsar Nicholas II and the Ministry of Transportation, he undertook extended trips through many different parts of the empire. Prokudin-Gorskii was particularly interested in recently acquired territories of the Russian Empire such as Turkestan (present-day Uzbekistan and neighboring states), which he visited on a number of occasions, including two trips in 1911. Turkestan appealed to him not only for its Islamic architecture but also for the transformation brought by Russian settlement. Large parts of Turkestan were suitable for the raising of cotton, which soon became a priority in the development of Russia’s Central Asian territories. 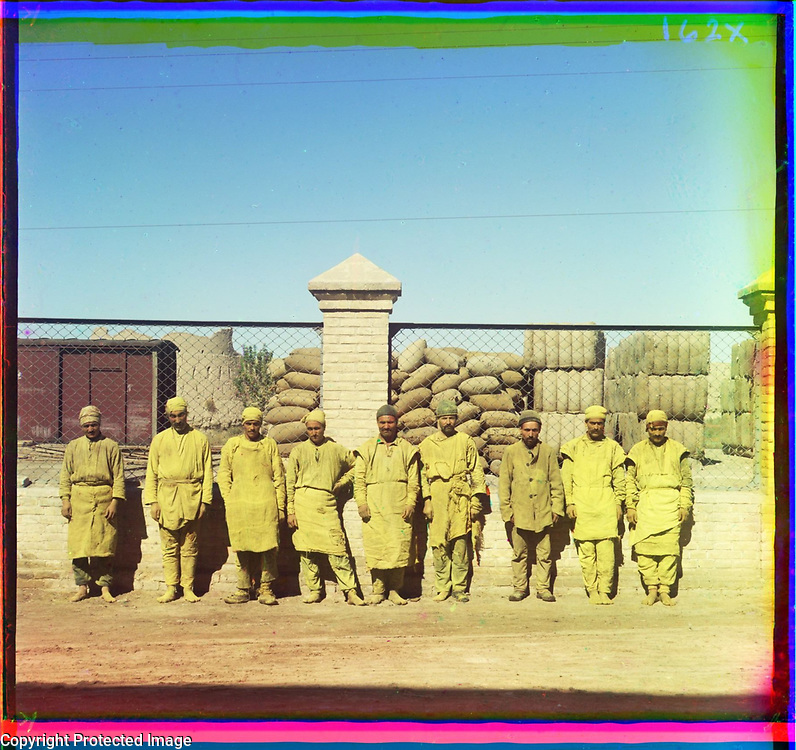