1865
This photograph of the Rustem-Bek Madrasah in Ura-Tyube (present-day Istarawshan, Tajikistan) is from the archeological part of Turkestan Album. The six-volume photographic survey was produced in 1871–72 under the patronage of General Konstantin P. von Kaufman, the first governor-general (1867–82) of Turkestan, as the Russian Empire’s Central Asian territories were called. Ura-Tyube (in Tajik, Ura-Teppa) is one of the oldest settlements in Central Asia. Located near the Syr Darya River some 80 kilometers southwest of Khujand, Ura-Tyube flourished under the Samanid dynasty in the 10th-11th centuries. Like many towns in the area, it was sacked by the Mongols in the early 13th century. It revived under the Timurids in the late 14th and 15th centuries and submitted to the Bukhara Shaybanids in the 16th century. In the late 18th century it achieved autonomy before becoming part of the Khanate of Kokand. Ura-Tyube was taken by the Russians in October 1866. Among its religious institutions was the madrasah, which is shown here. The two-storied structure follows a 16th-century design, with arched cells for living and study and a large interior courtyard. The main entrance has an iwan (vaulted hall, walled on three sides, with one end open) arch, and the facade is flanked by corner towers. The iwan facade is covered by a surfeit of crude decorative work that appears to be later than the original structure—perhaps as late as the 19th century. In the foreground are adobe dwellings. 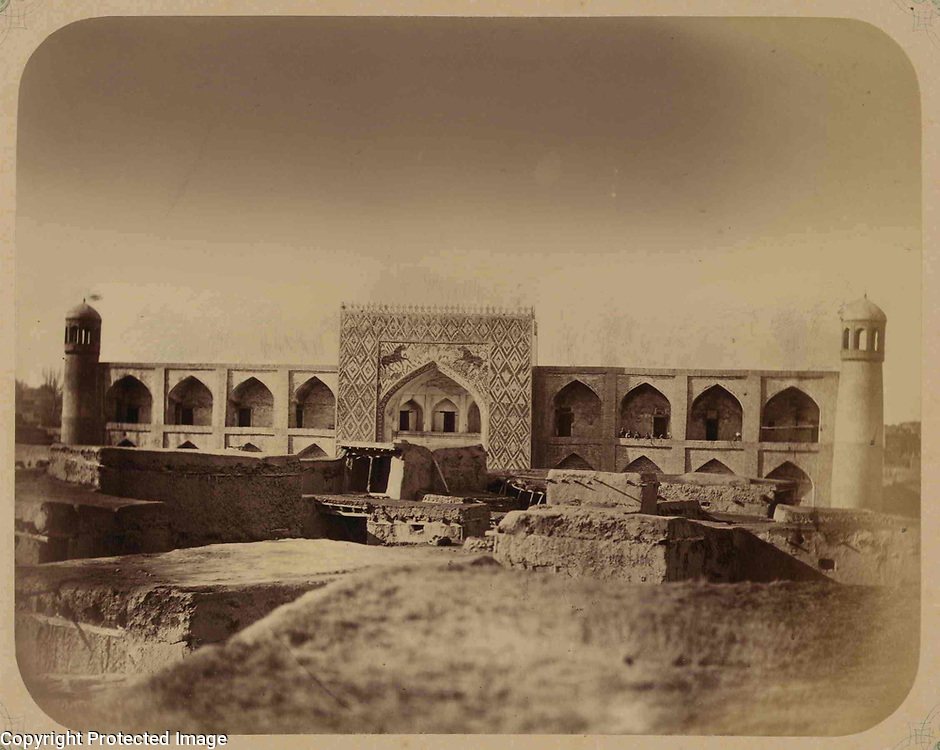