1500
This illuminated frontispiece is one of two pages that would have formed the opening double-page composition of a manuscript. It is possible that it belonged to a Qurʼan. The title would have appeared in the top and bottom rectangular panels. The central medallion may have contained the beginning of the first chapter of the Qurʼan, al-Fatihah (The opening). It also may have served as a space for the work’s dedication to a patron or blessings upon its owner. The illumination is typical of Qurʼan frontispieces made in Herat (present-day Afghanistan) about 1500–1550. The central gold medallion and rectangular panels are set in polychrome scrolls with white and orange flowers on a blue background. These panels are framed by an outer border composed of black cartouches alternating with gold quatrefoils on a red background. The remaining outer space is decorated with overlapping blue and gold lappets. Illuminators during the first half of the 16th century experimented with the double-page illuminated frontispiece. The artist Shaykhzadah began using black backgrounds and invented new arabesque or scrollwork motifs. These motifs not only appeared in frontispieces but were used as architectural ornamentation in manuscript paintings. Such decorative connections highlight the close relationship between illuminators and painters, who collaborated in the production of illuminated and illustrated manuscripts. 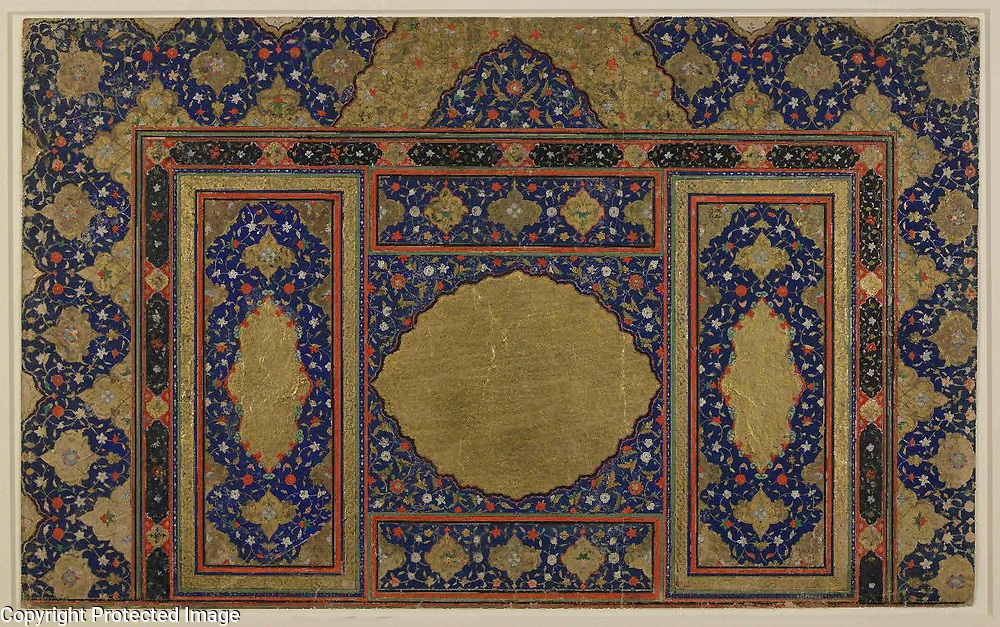