Antiquities of Samarkand. Mausoleum of the Emir Timur Kuragan (Gur-Emir). Interior of the Tomb. View of the Family Crypt of Tamerlane

1868
This striking sketch of the crypt at the Gur-Emir mausoleum in Samarkand (Uzbekistan) is from the archeological part of Turkestan Album. The six-volume photographic survey was produced in 1871-72 under the patronage of General Konstantin P. von Kaufman, the first governor-general (1867-82) of Turkestan, as the Russian Empire’s Central Asian territories were called. The album devotes special attention to Samarkand’s Islamic architectural heritage, including Gur-Emir (Persian for “tomb of the ruler”). Although known primarily as the burial place of Timur (Tamerlane), Gur-Emir was begun by Timur in 1403 to commemorate the death of his beloved grandson, Muhammad Sultan. His sudden death at the age of 27 deprived Timur of his chosen successor. The shrine was not yet completed at the time of Timur's own death from pneumonia in 1405. With his burial there, Gur-Emir became the Timurid mausoleum. The interior was completed by Timur’s grandson Ulugh Beg, also buried at Gur-Emir. The mausoleum has two levels, the upper of which has imposing sarcophagi, while the lower contains the crypt, or sepulcher, whose more austere tombs hold the actual remains. The sketch frames the view with rough brick to give the sense of a grotto. The perspective skillfully includes the four arches and the low circular vaulted ceiling. The central slabs have carved inscriptions. 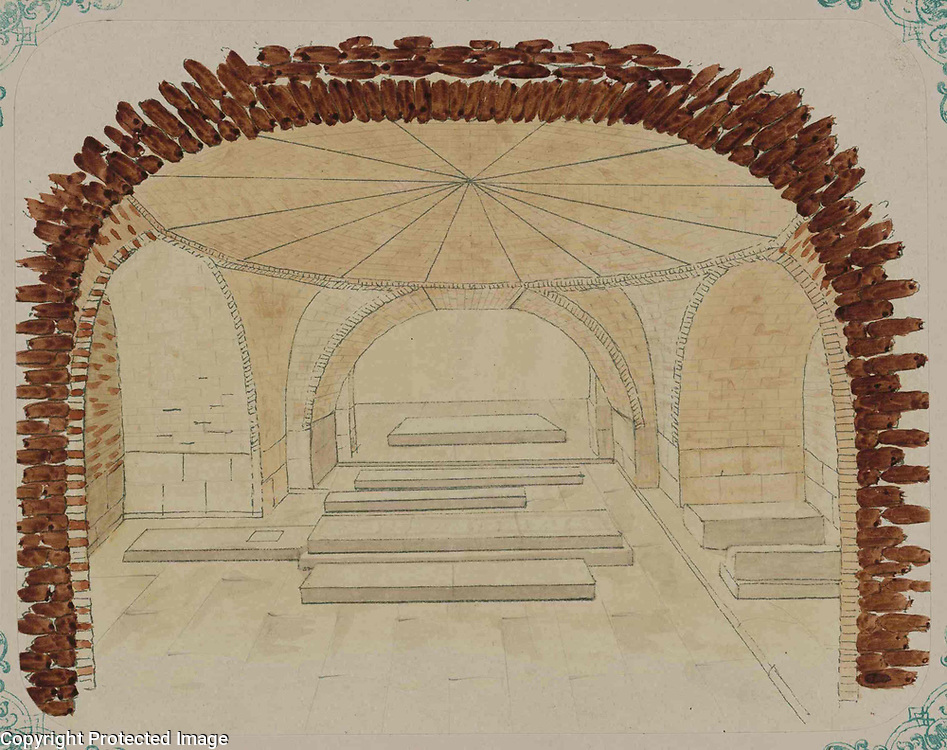