Antiquities of Samarkand. Tomb of the Saint Kusam-ibn-Abbas (Shah-i Zindah) and Adjacent Mausoleums. Mausoleum of Shirin Bika. View of the Front

1865
This photograph of the facade of the Shirin Bika Aka Mausoleum at the Shah-i Zindah necropolis in Samarkand is from the archeological part of Turkestan Album. The six-volume photographic survey was produced in 1871-72, under the patronage of General Konstantin P. von Kaufman, the first governor-general (1867-82) of Turkestan, as the Russian Empire's Central Asian territories were called. The album devotes special attention to Samarkand’s Islamic architecture, such as 14th- and 15th-century monuments from the reign of Timur (Tamerlane) and his successors. Of particular note is the Shah-i Zindah (Persian for “living king”) ensemble, revered as a memorial to Kusam-ibn-Abbas, a cousin of the Prophet Muhammad. This mausoleum was built in 1385-86 for Timur’s younger sister and is considered one of the greatest achievements at the Shah-i Zindah complex. Its design, which reflects Persian influence, centers on a remarkable entrance arch, or peshtak, which culminates in “stalactite” corners supporting a semicircular open vault. Despite significant damage, the facade shows profuse ceramic ornamentation, including early examples of composite terracotta mosaics in colors ranging from orange and red to deep blue. The facade is also decorated with inscriptional bands in the cursive Thuluth style. This view is taken from the north corner of the Shadi Mulk Mausoleum. 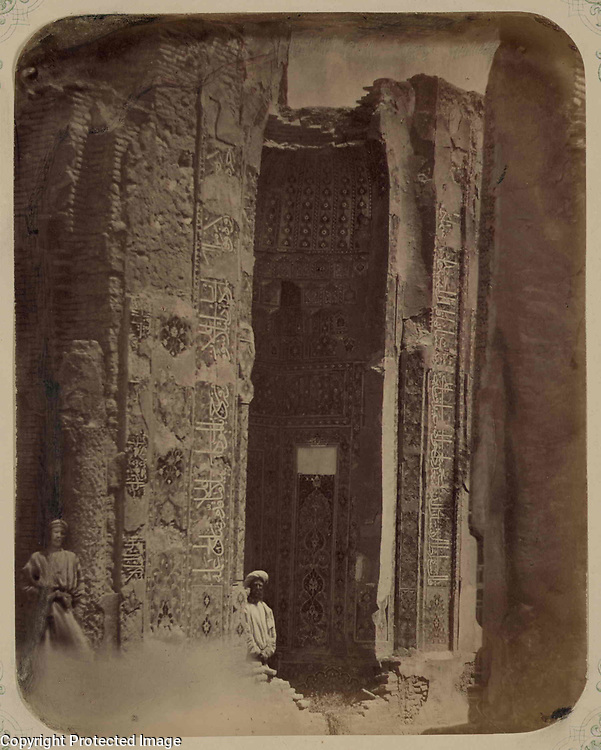