Antiquities of Samarkand. Madrasah of Bibi Khanym. Congregational Mosque (Friday Mosque). Inscription on the Left Panel of the Entry Niche

1865
This photograph of a detail of the main mosque at the Bibi Khanym ensemble in Samarkand (Uzbekistan) is from the archeological part of Turkestan Album. The six-volume photographic survey was produced in 1871-72, under the patronage of General Konstantin P. von Kaufman, the first governor-general (1867-82) of Turkestan, as the Russian Empire's Central Asian territories were called. The album devotes special attention to Samarkand’s Islamic architecture, such as 14th- and 15th-century monuments from the reign of Timur (Tamerlane) and his successors. Built in 1399-1405 with the spoils of Timur’s campaign in India, the Bibi Khanym ensemble was the location of the city’s Main mosque, named in homage to Timur’s senior wife, Sarai Mulk Khanym. The ensemble centers on the vast structure of the main, or Friday, mosque, one of the largest in the Islamic world. As with all structures in the ensemble, the main mosque suffered major damage in this active seismic zone. This view shows the left (south) inner facade of the great arch of the entrance iwan. The corner is marked by a large attached column clad in ceramic tiles, above which rises the arch. The base of the inner surface displays a horizontal inscription band in the Thuluth style framed by floral strips. The wall surface is decorated with a simple but monumental geometric figure of lines intersecting at 45-degree and 90-degree angles. 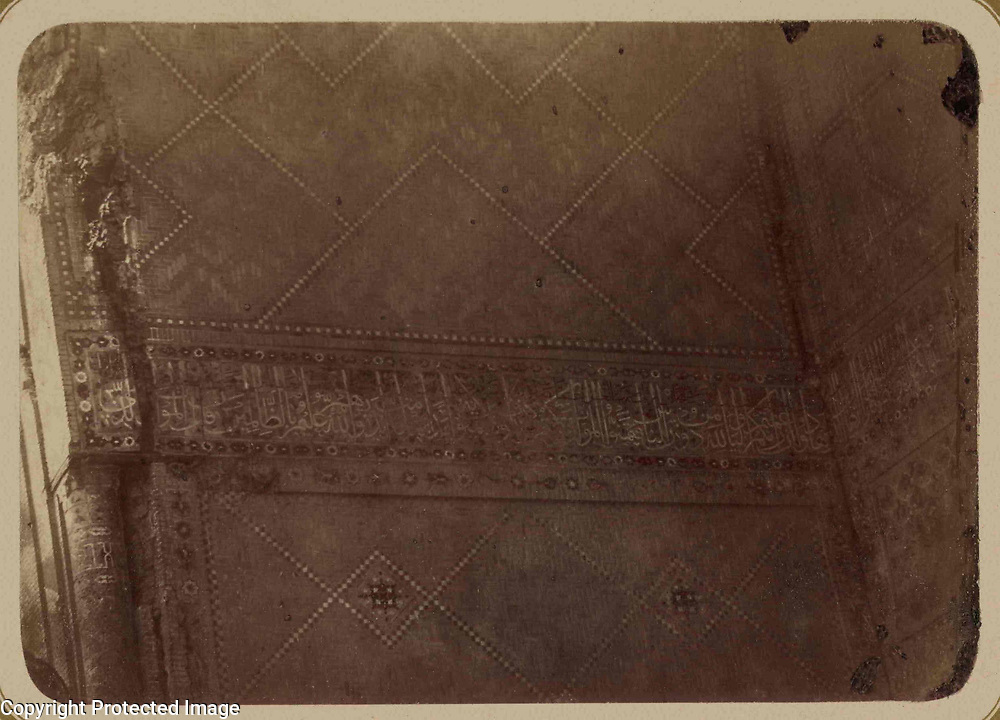