1868
This photograph of the Ak Sarai mausoleum in Samarkand (Uzbekistan) is from the archeological part of Turkestan Album. The six-volume photographic survey was produced in 1871-72 under the patronage of General Konstantin P. von Kaufman, the first governor-general (1867-82) of Turkestan, as the Russian Empire’s Central Asian territories were called. The album devotes special attention to Samarkand’s Islamic architectural heritage. Although relatively modest in appearance, the Ak Sarai mausoleum is one of the more important burial shrines in Samarkand by virtue of its association with the Timurid dynasty. The initiative for its construction came from the Timurid ruler Abu Said, who wished to supplement the nearby great Guri Emir mausoleum as a burial place for the dynasty’s male line. Abu Said himself died in 1469 during fighting with Turkmen forces in Azerbaijan, and construction of the mazar (mausoleum) occurred in the 1470s. Although Ak Sarai lacks the imposing dome of the earlier Rukhabad mausoleum, it had a highly developed centralized design that was richly decorated on the interior. Seen here is a pointed iwan (vaulted hall, walled on three sides, with one end open) arch, with standing figures that give a sense of scale. Considerable damage is evident in the surface of the massive brick walls and vaults. In the foreground are houses of sun-dried (adobe) brick whose flat roofs are supported by wooden beams. 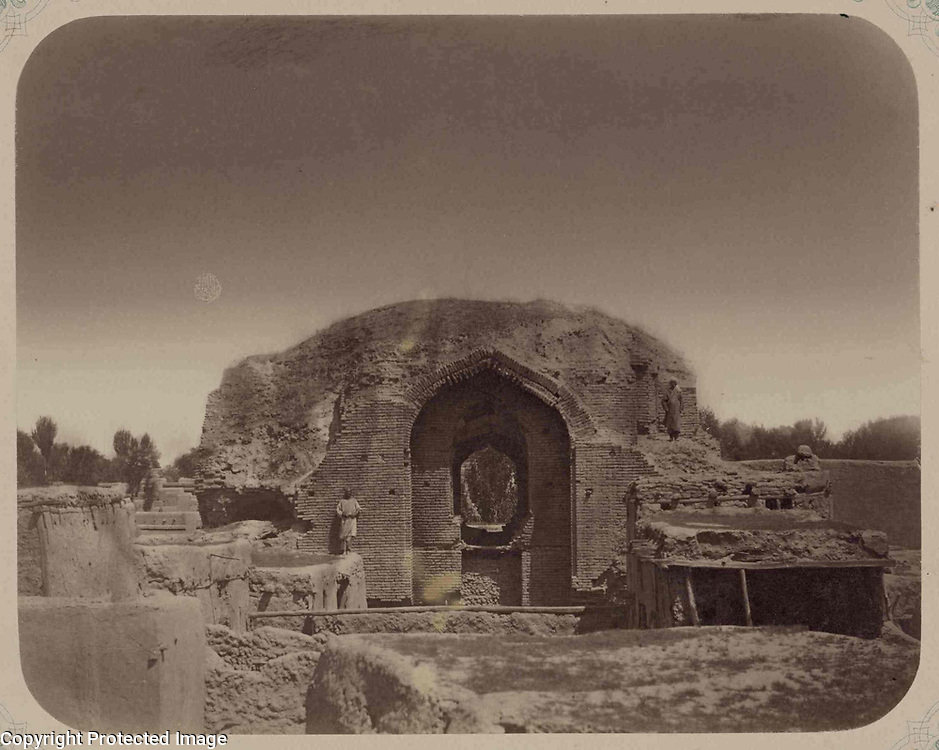