Antiquities of Samarkand. Tomb of the Saint Kusam-ibn-Abbas (Shah-i Zindah) and Adjacent Mausoleums. Mausoleum of Sha Arap. Detail of the Upper Section of the Arched-Panel Niche

1865
This photograph of facade decoration from an unidentified mausoleum in the northern cluster of shrines at the Shah-i Zindah necropolis (Samarkand, Uzbekistan) is from the archeological part of Turkestan Album. The six-volume photographic survey was produced in 1871-72, under the patronage of General Konstantin P. von Kaufman, the first governor-general (1867-82) of Turkestan, as the Russian Empire's Central Asian territories were called. The album devotes special attention to Samarkand’s Islamic architecture, such as 14th- and 15th-century monuments from the reign of Timur (Tamerlane) and his successors. Of particular note is Shah-i Zindah (Persian for “living king”), built on the elevated site of an ancient settlement known as Afrosiab and revered as a memorial to Kusam-ibn-Abbas, a cousin of the Prophet Muhammad. Although the patron of this mausoleum has not been conclusively identified, its date of construction is known to be 1360-61. Despite significant damage, the facade is distinguished by polychrome ceramic ornamentation with floral, geometric, and inscriptional patterns. This carved terra-cotta work is located on the right inner wall of the facade arch, or peshtak. As in much of Islamic art, the design is based on a complex interplay of geometric figures, as lines intersect to create octagons and 12-pointed stars that contain intricate tendril motifs. 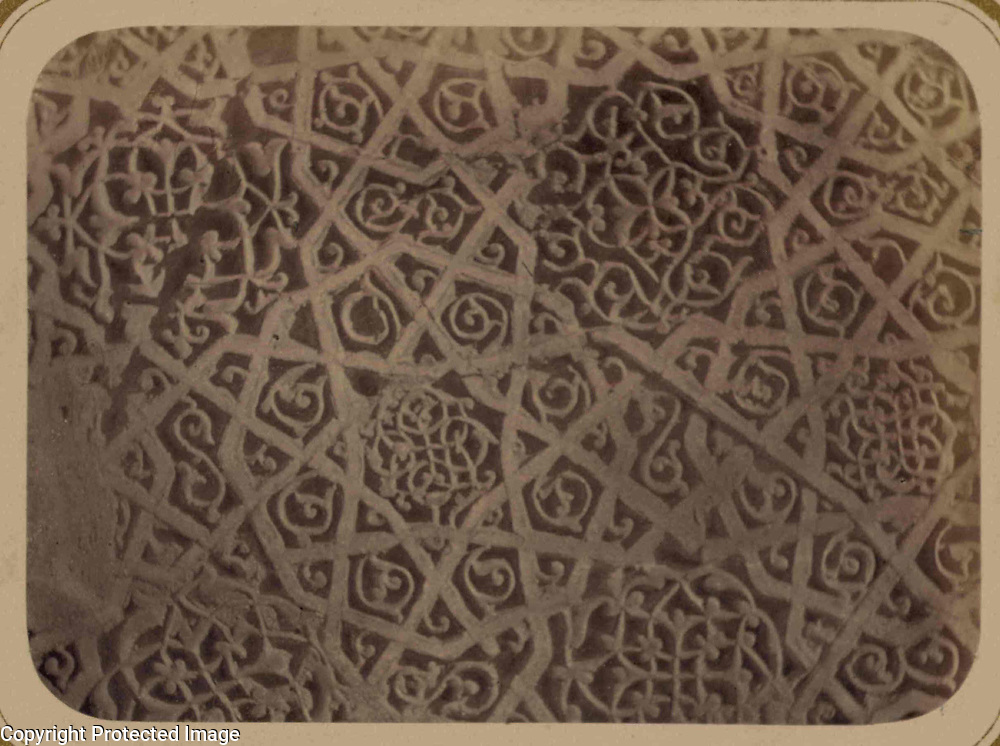