Antiquities of Samarkand. Tomb of the Saint Kusam-ibn-Abbas (Shah-i Zindah) and Adjacent Mausoleums. Mausoleum of Abu Tengi. Inscription on the Left Side of the Facade (Top)

1865
This photograph of the Usto Ali mausoleum at the Shah-i Zindah necropolis in Samarkand is from the archeological part of Turkestan Album. The six-volume photographic survey was produced in 1871-72 under the patronage of General Konstantin P. von Kaufman, the first governor-general, in 1867-82, of Turkestan, as the Russian Empire’s Central Asian territories were called. The album devotes special attention to Samarkand’s Islamic architecture, such as 14th- and 15th-century monuments from the reign of Tamerlane and his successors. Shah-i Zindah (Persian for “living king”) is revered as a memorial to Kusam-ibn-Abbas, a cousin of the Prophet Muhammad. The patron of this mausoleum (built around 1380) is unknown. The mausoleum is often referred to by the name of its master builder, Usto Ali Nesefi. Much of the facade has suffered severe losses, but the surviving parts of the ornamentation reveal one of the most elaborate decorative programs in the entire necropolis. The ceramic work includes polychrome majolica tiles in geometric patterns, as well as vertical bands of Arabic script in both Kufic and Thuluth forms. This ornamental array is framed by narrow strips with block (Kufic) inscriptions which intersect to form an eight-pointed star. Although lacking large segments toward the top, the outer bands on either side display foliate motifs and intricate strapwork. 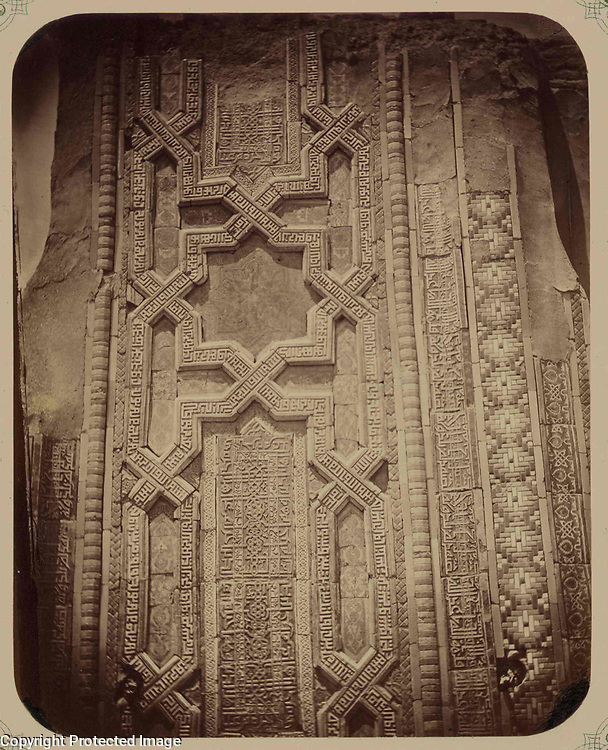